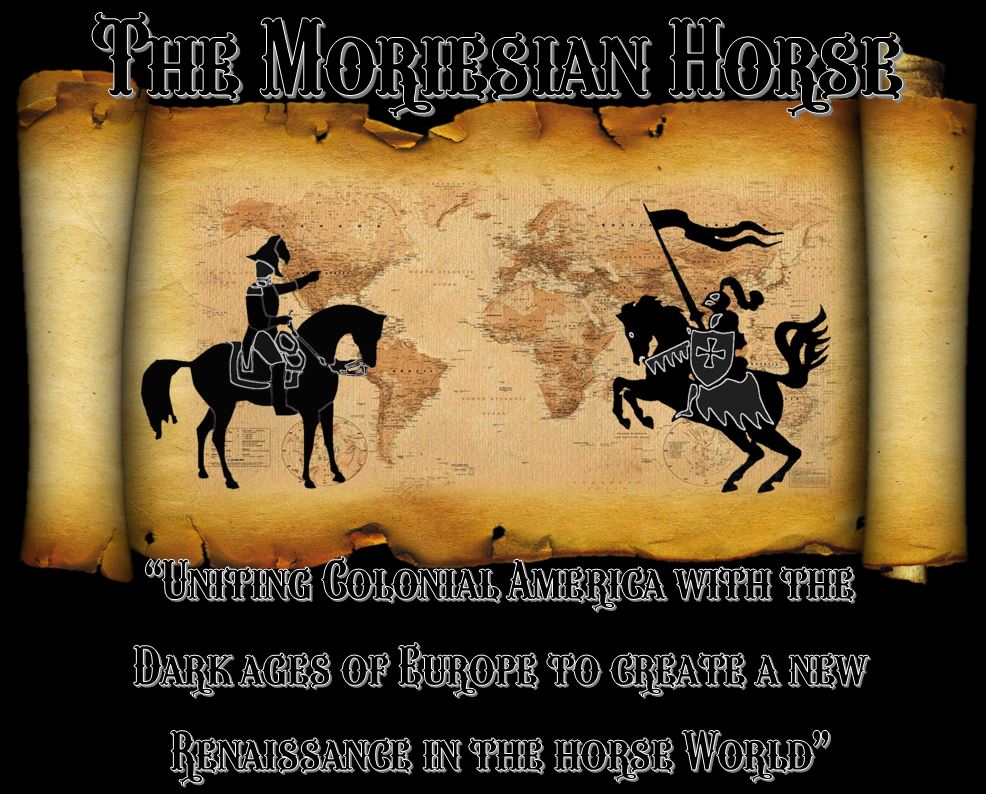 It is obvious that we love the Morgan breed here at Rafter Bar D. . . however, we have long admired the Friesian breed as well, and for many years I have dreamed of owning a Friesian horse. We found a very special Friesian mare here in Wisconsin named Marieke fan North Ster, she was "love at first site" for me. We brought her home and she is proving to be everything I had ever dreamed a Friesian to be.  She has produced two outstanding Moriesian foals for us! We have now purchased another Friesian mare, Tyrza J. and we look forward to breeding her to Blaze in the spring. Two amazing breeds coming together to produce something very special indeed. I present to you the first grulla Moriesian in the world. RBD Callista Dea Dun. She is pictured below as a yearling and she is proving to be everything we ever dreamed her to be. 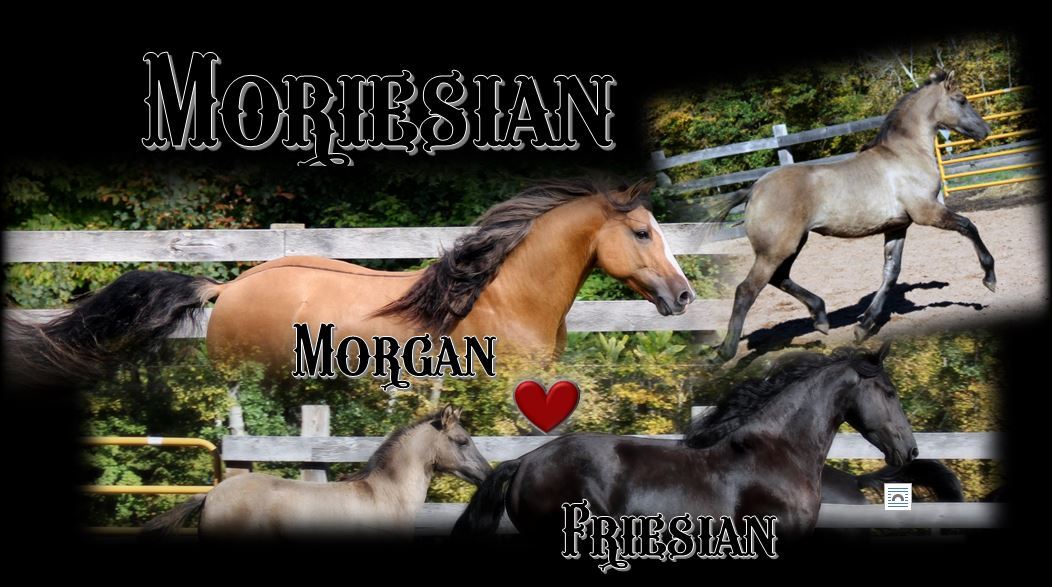 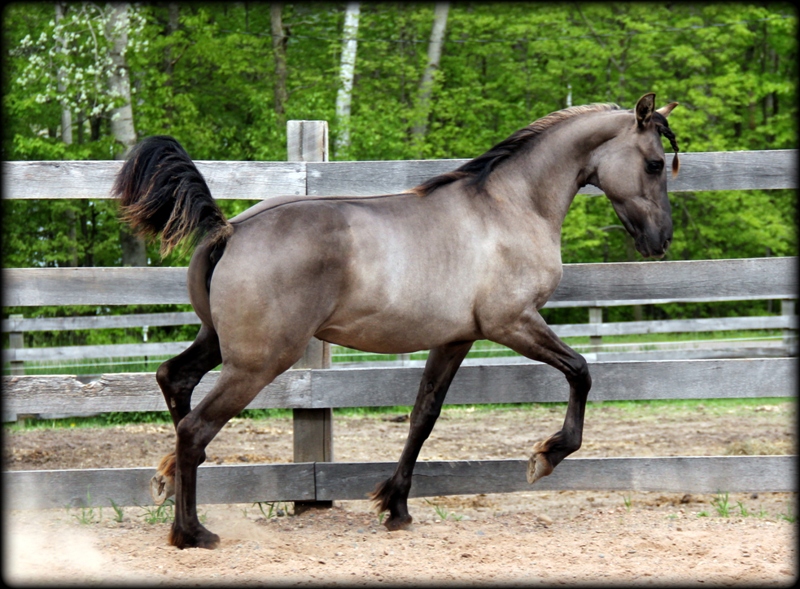 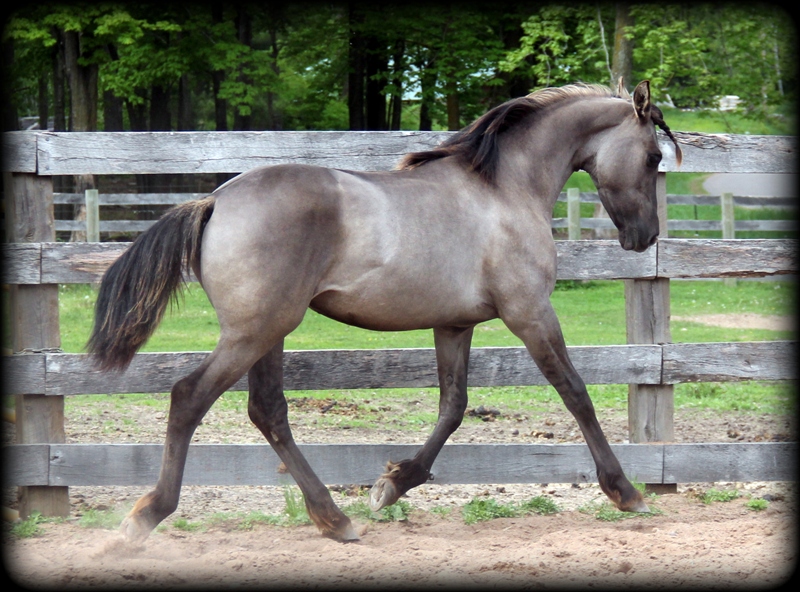 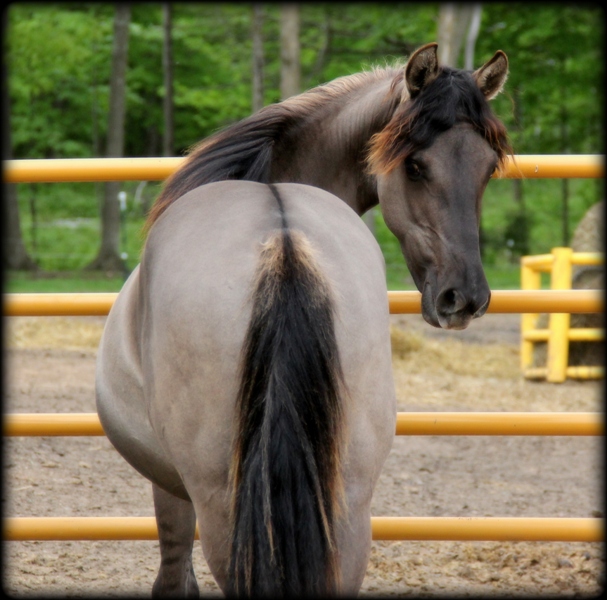 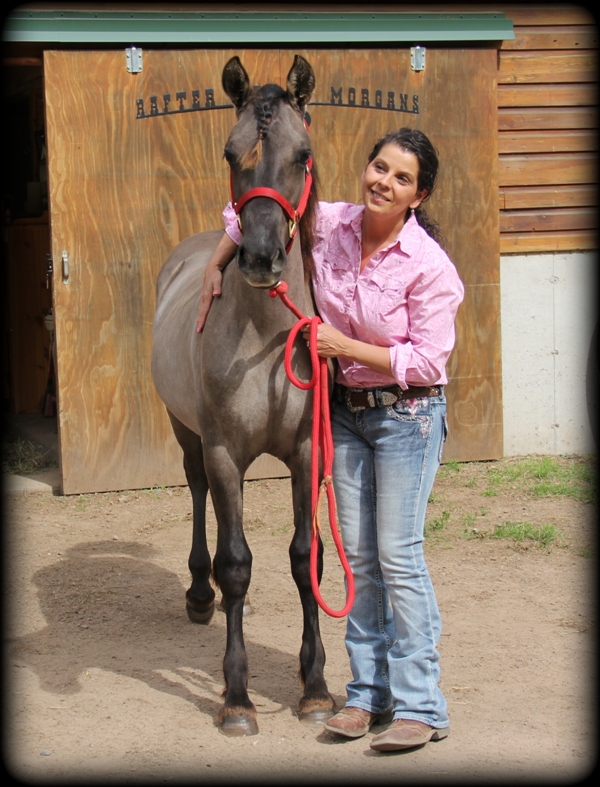 The Moriesian Horse is the result of a breeding program initiated in the United States to produce horses that combine the elegance and charisma of the Friesian with the versatility of the Morgan. They display an up-headed stature, expressive face, compact body and long thick mane and tail. Their slope of shoulder and movement tends to be more Friesian-like which gives them a regal appearance. Their average size of 15.0 to 16.0 hands makes them comfortable for most riders.

Lighter boned than a Friesian, Moriesians have more of the qualities sought after in a sport horse. The balance and symmetry of this animal is truly art in motion. They make natural show animals that are magnificent to watch, ride and drive. Many have shown themselves to excel in combined driving competitions and have proven apt competitors in classical dressage

Moriesians are adaptable and eager to perform.  Coming from two breeds known for their heart, mild manners, and friendly dispositions Moriesians make wonderful family horses.  The breed is honest and willing to please.  Its versatility brings lasting value to the owner. Visit the Moriesian Horse Registry. 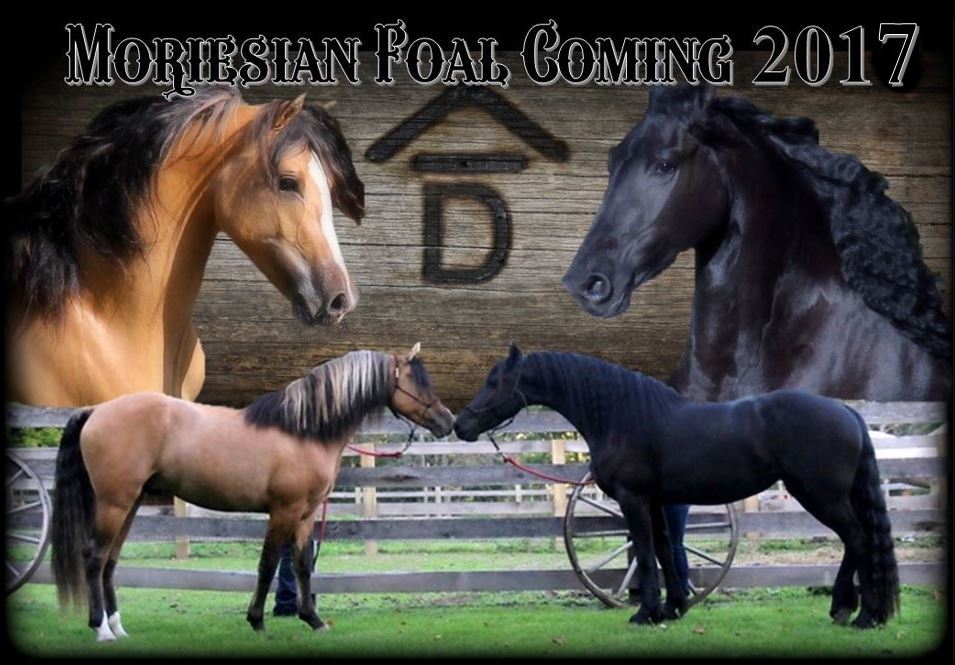 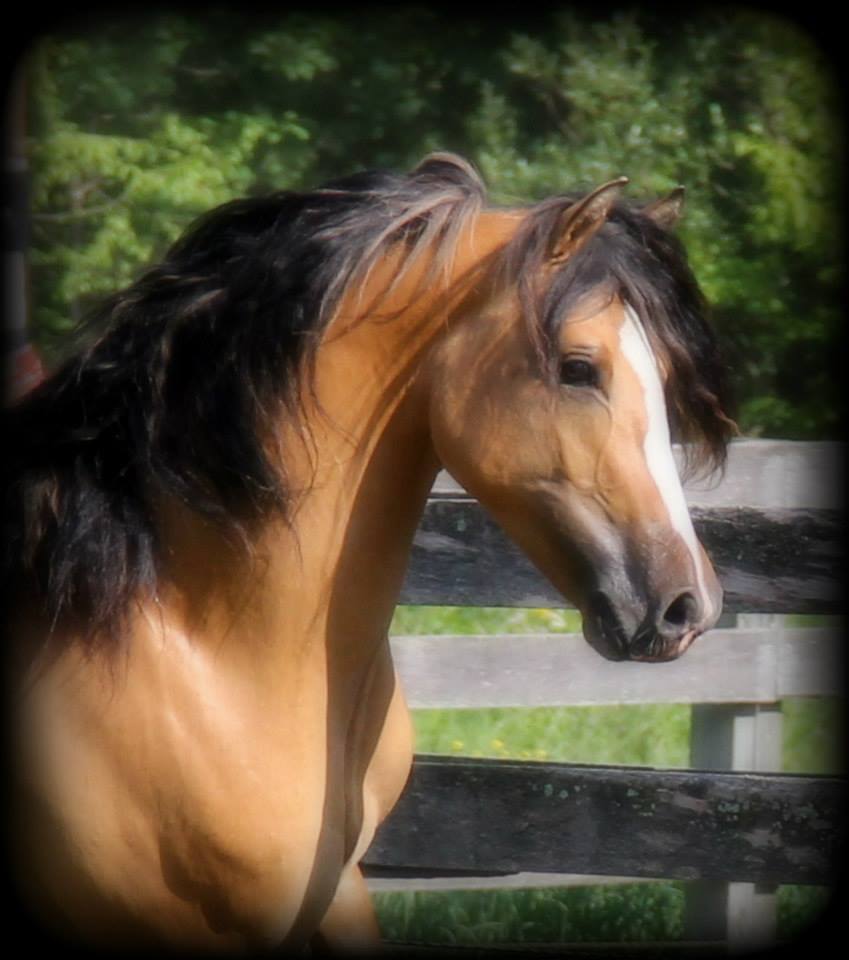 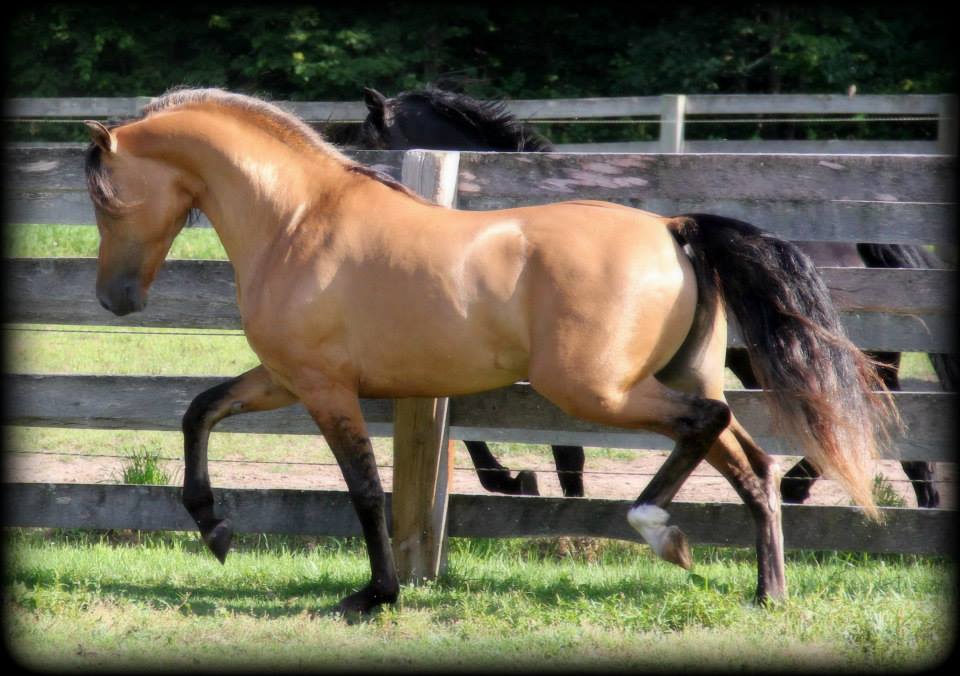 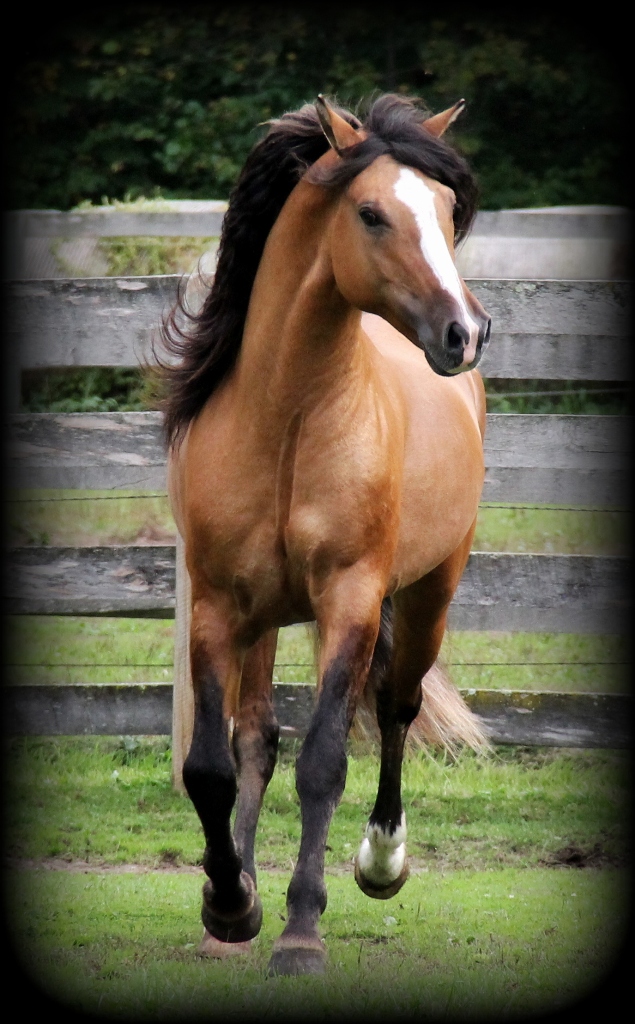 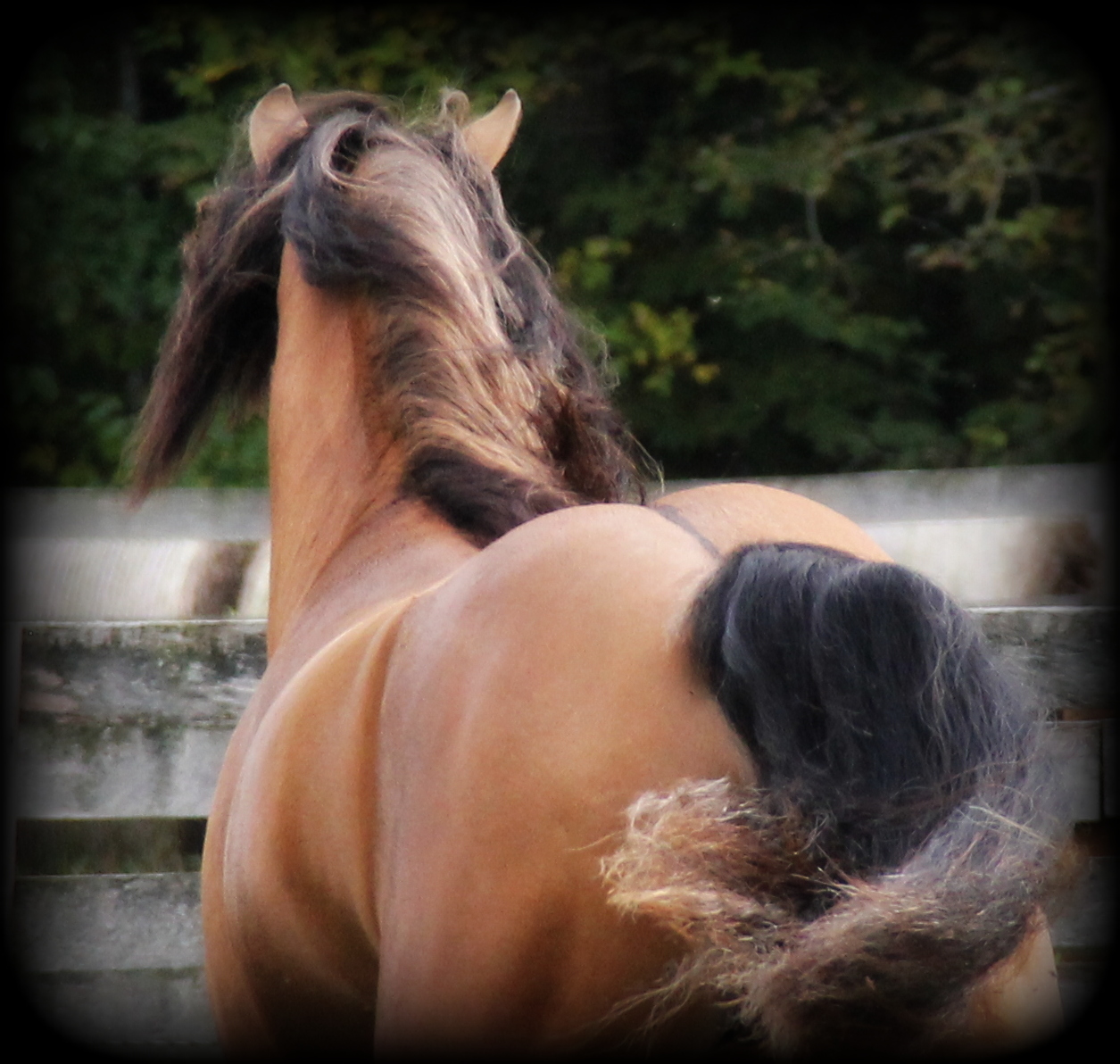 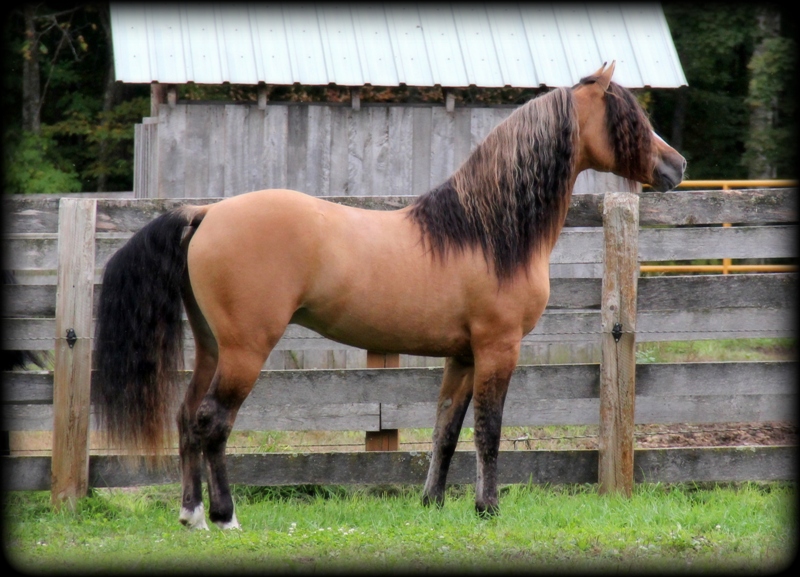 The Morgan horse has an unmistakable proud carriage with an upright graceful neck, a beautiful head with expressive eyes, a deep compact body with strength and athleticism, and the versatility to excel in many disciplines. Their height can range from 14.2H to 15.2H, and their forward movement is powerful yet elegant and simply breathtaking. Their intelligence and good sense combined with their soundness and stamina has allowed this horse to excel under western tack moving cattle, western pleasure, reining or trail riding and they are  ridden in english tack excelling in everything from dressage, english pleasure to jumping and they are excellent driving horses under harness.

America's first breed of horse tracing back to a small bay colt named Figure. When Justin Morgan purchased him and brought him to Vermont in in 1791 his legacy began. The ancestors of our Morgan horses today carried our soldiers into battle during the Civil War, plowed the fields for food and carried families to church. Their strength, stamina, hardiness and tractability made them desirable to many.

The Morgan horse is noted for a wonderful people loving temperament and willingness to learn along with incredibly beautiful style. 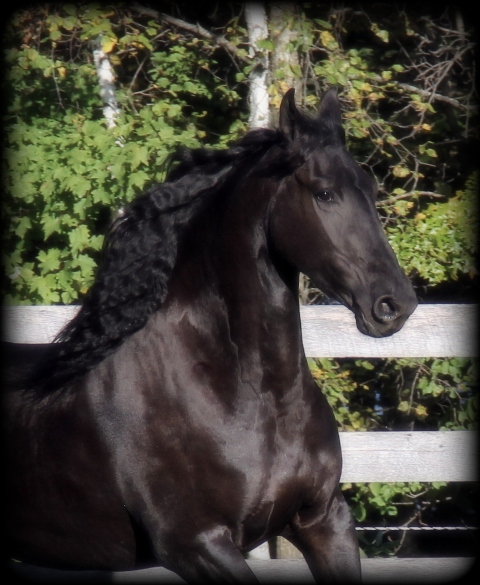 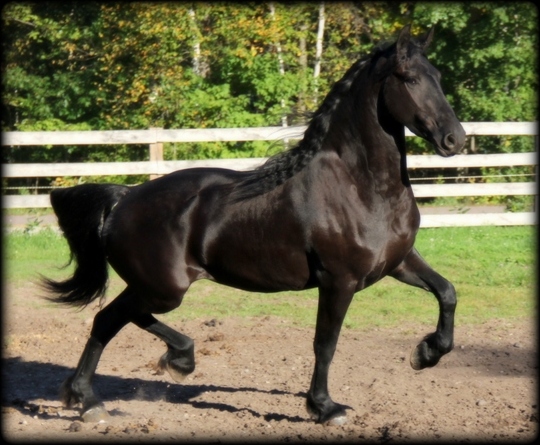 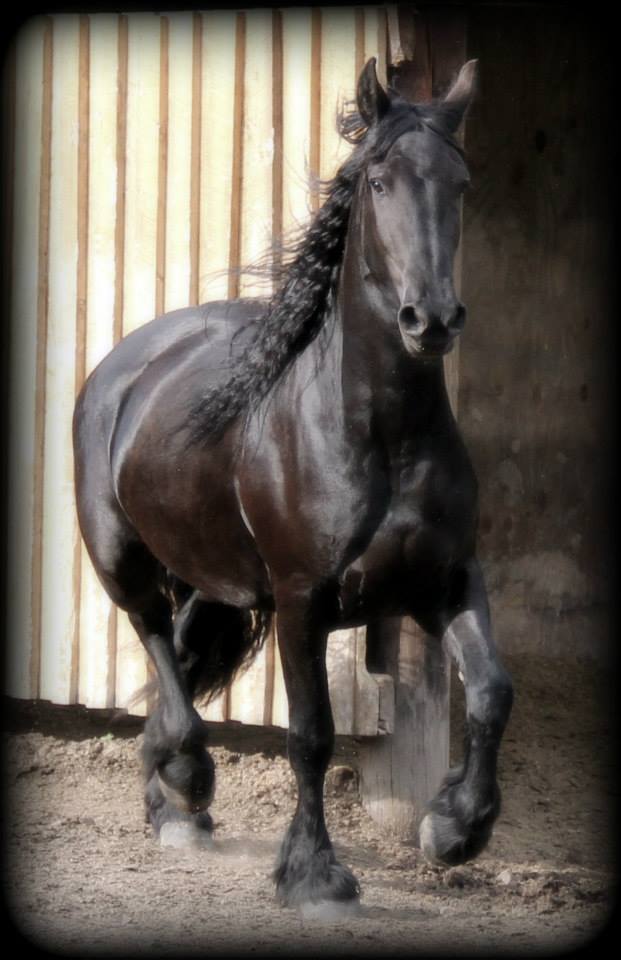 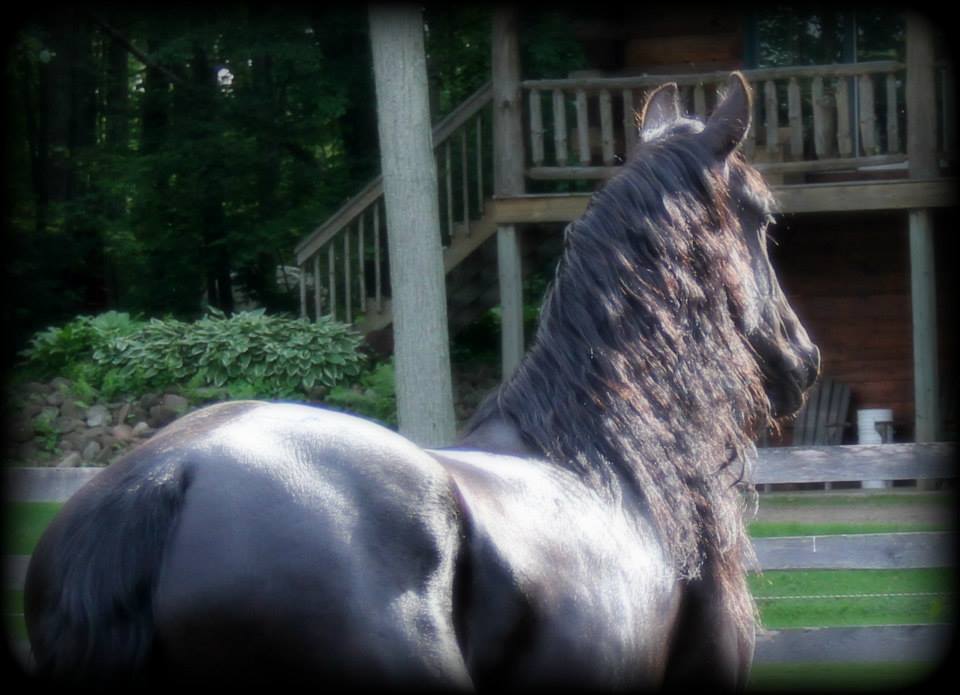 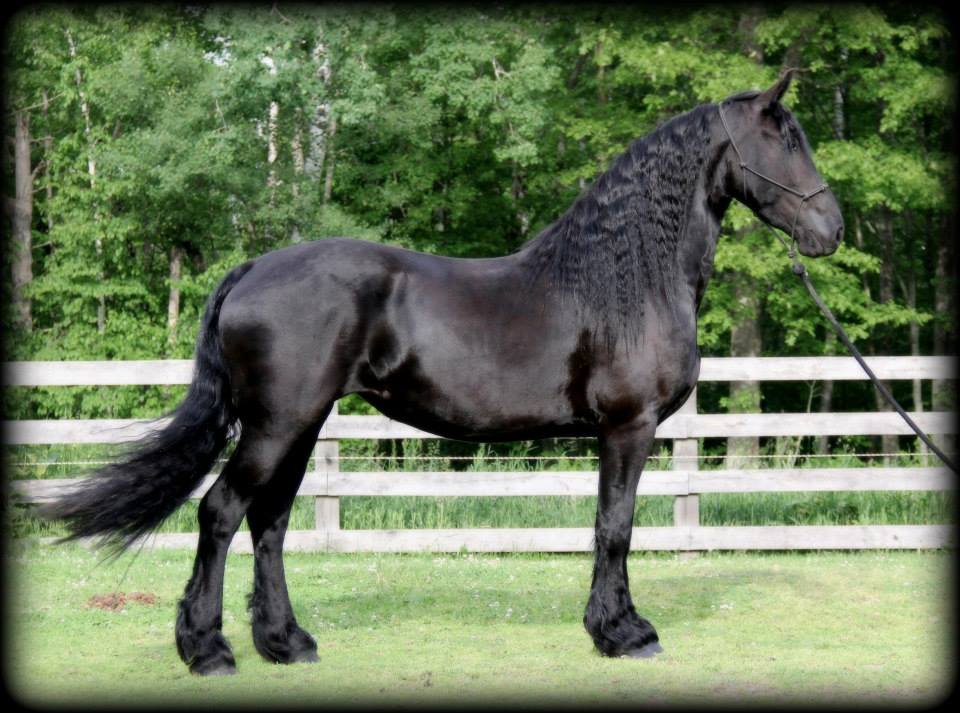 The Friesian horse, graced with a jet black coat, a big powerful yet elegant frame, and their signature high stepping gait, leave many speechless with their beauty and presence.

Friesian horses originated in Friesland—a province of The Netherlands. The Friesian horse, one of Europe's oldest breeds, was originally imported to North America in the seventeenth century. Ancestors of the Friesians today were used in medieval times to carry knights into battle.

Friesians are an up-headed horse with and expressive face, powerful elastic movement, grace and agility. This breed has powerful overall conformation and solid bone structure, with what is called a "Baroque" body type. They have luxurious thick long manes and tails with hair feathering on their lower legs.

The Friesian is noted for being gentle and docile with a willing temperament as well as a show stopping presence. 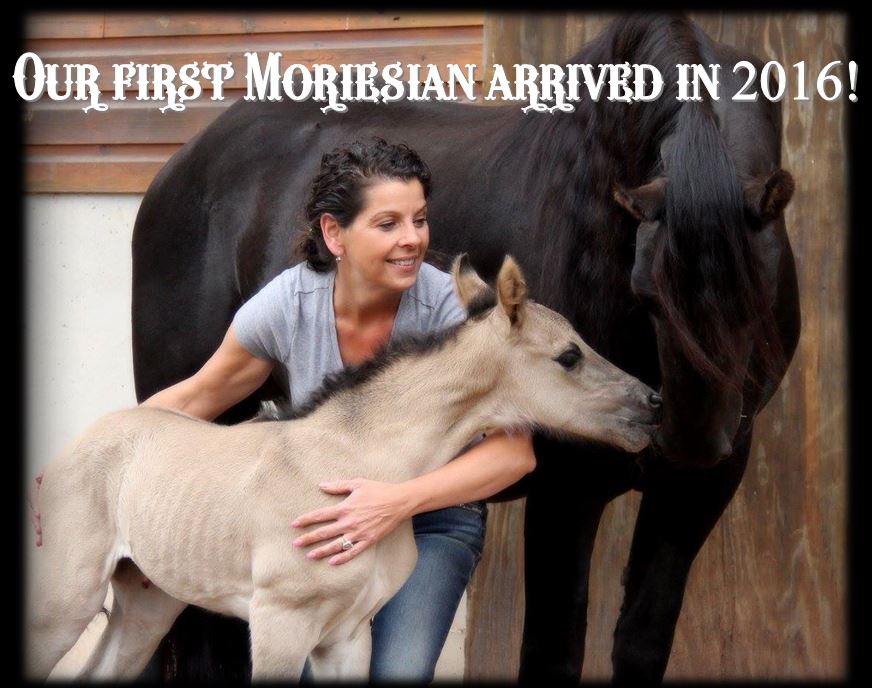 Click photos below to enlarge and view Callista's photo gallery.

I will keep adding to this gallery as she grows. Enjoy!

We are happy to announce that Rafter Bar D has a prefix registration from the Moriesian Horse Registry of RBD for our Moriesian foals. We also have another Moriesian foal coming this spring. The foal will be grulla (like the filly from last year) or bay dun like the sire, Blaze. How exciting! 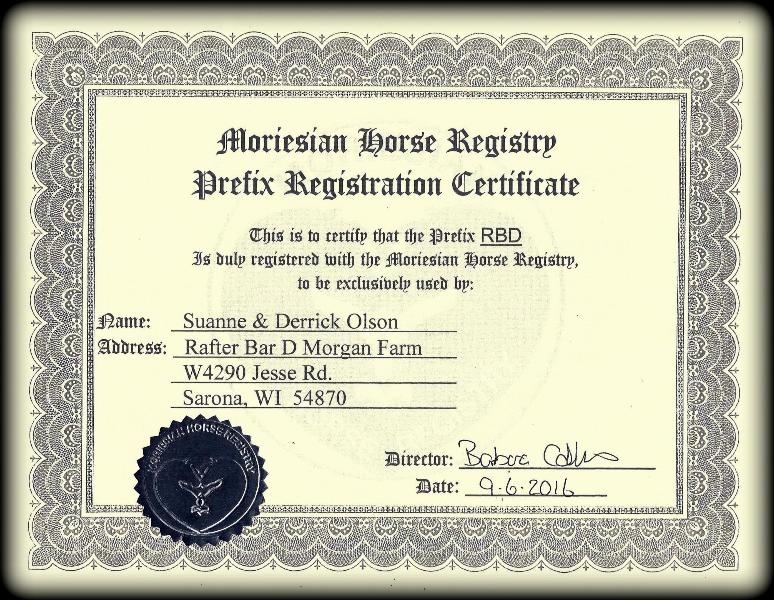 She's here!! Our first Moriesian foal is a filly and she's grulla! To our knowledge Callista is the first Grulla Moriesian in the world. She is out of our beautiful Friesian mare, Marieke fan North Ster and by our Morgan stallion, Amberfields Blaze n Dun. What an incredible cross! She is "in your pocket" and such a beautiful filly. Just love her! Her name Callista means "the most beautiful" and Dae means "Goddess".

We are retaining RBD Callista Dea Dun to see her mature and she will be my personal riding horse. We also have plans to breed her in the future to one of our Morgan stallions and to a Friesian stallion. Both crosses can be registered with the Moriesian Horse Registry. 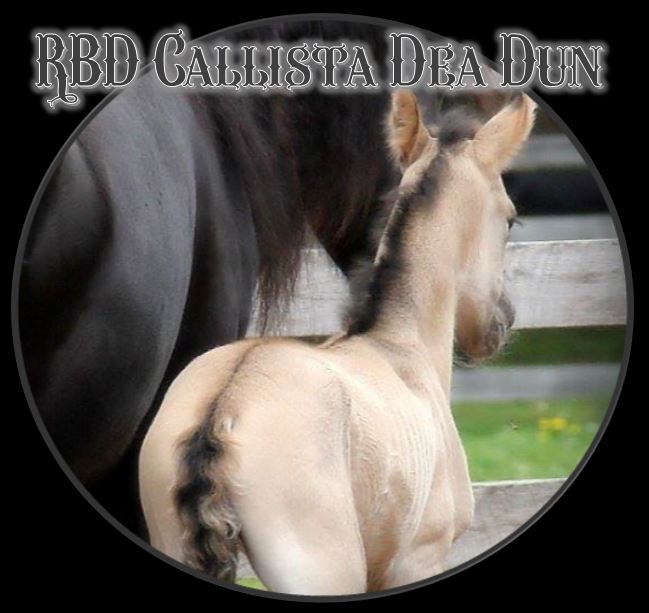 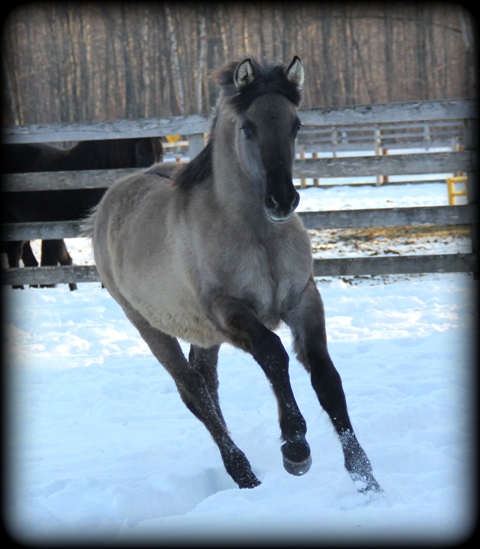